Being alive is fantastic! But let’s face it, life can be super twisty, sticky, and messy! Most people wouldn’t drop trash on the ground and expect others to pick it up.  Right? So why wouldn’t the same people turn around and say “I’m sorry” to pick up their mean words or have a potentially difficult conversation before making a really dumb decision?

Ok, I know, bad analogy!  Picking up trash is much easier.  The point I’m making is that we clean up our own proverbial messes! 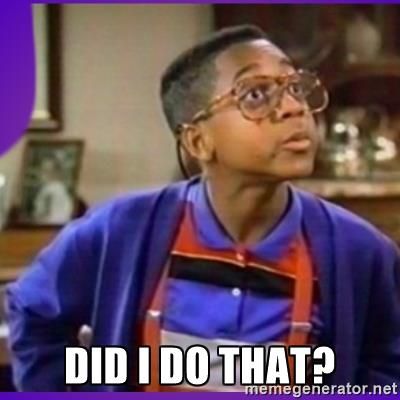 Spoiler alert… most of the messes that appear in our lives… are caused by us!  We drop friggin grenades into our lives and the lives of others, then look side to side asking like Steve Urkel from the 90s sitcom Family Matters “Did I do that?”

How DO we sabotage our lives?  Well, below are a few examples of the asinine things we do that send our lives and the lives of others topsy turvy.

Yeah, you get the point!

Let’s unpack a few examples, shall we?

Let’s start with this Ghosting crapola.  Call me old, but in my day we were about Ghost Busters and that fabulous movie GHOST   not walking away from situations and people without ever saying a word!  What happens if you run into victims of your ghostiness?  Do you stop, drop, tuck and roll across the floor like there’s a fire to avoid them?  Why create such a mess?!  Have a real conversation, at least they’d know what’s going on versus wondering if you died until they see you at the mall hiding under a table in the food court.  If you make a choice, why hide? Own it and clean it up! Say YES to your MESS!

Ghosting a job?  Really?  Passive aggressive much?  When did this become a thing?  My sister told me about a guy that she worked with who didn’t show up to his own goodbye party! She told me that they all sat around the table speaking to an empty chair, laughing and eating all the goodies.  At least that guy (although still weird that he no showed his last day) told them he was leaving.  I’m hearing about people who just stop showing up…geez?!  People, why not (if nothing else) write an email resignation?  The world is small and even smaller with social media.  Own it!  Let them know you won’t be back.  You don’t need to say why…JUST Say YES to your MESS!

Why lie via social media about your fabulous life. Why lie to a potential online love interest about your age, size, marital status, or active lifestyle?  FYI:  when people meet you, you do know the jig is up right?  I’ve heard stories about people using pictures of themselves at younger ages, or even pictures of “better looking” people as a representation of themselves!  So, when they meet your fake butt, do you think they won’t notice the extra weight or aged appearance?  The funny thing is that some of the people sharing their online dating stories said that they might have liked the person as they were had they not misrepresented themselves!

I know a person who can’t understand why they’re single.  Of course, I explained that we get back what we put in! Stop lying to the world on Facebook, correct your dating profile.  Own it!  Say YES to YOUR mess!

OK, so how many people actually get away with cheating?  Before you answer, I’m not talking about those whose significant others are forgiving enough to keep their cheating butt!  I’m talking about the old school sneaky cheat who meets at a motel to do their dirty business or spends money to just to keep a secret lover on tap!

FYI, if you cheat, you are creating a mess for yourself AND at least 2 other people…even more if you have a family.  If you are the lover of a cheater AND you KNOW they’re cheating the karma train has a seat for you too!  Not judgement… FACTS!

Say YES to YOUR mess!  Have a hard conversation. Discuss the issues in the relationship. Make a choice.  Allow the people you hurt to cry it out, grieve and remove you from their lives…or keep you around.  It’s their choice NOT yours! Own it!  Say YES to YOUR mess!

I am amazed when I see people rushing in and out of traffic attempting to get somewhere quickly.  Years ago I witnessed an accident where a young girl made the decision to rush a turn.  She was T-boned on the passenger side of her car.  Since I saw the whole thing, I stayed as a witness for the police who recorded my information on the report.  Do you know this young lady called me challenging what I saw!?  IT WAS her fault!  She begged me to change my story because her insurance would go up.  Really?  How about you Say YES to YOUR mess little lady.  So, if I lie, the other person’s insurance goes up, bbuuttt as long as is not YOUR increase it’s all good?!  You all know that I dodged that great ball of karmic debt lodged at my forehead!  That was a long time ago.  Today, I’d say something like “Give yourself the benefit of the lesson and drive better next time.  Just be happy no one was hurt by sitting on that side of your car!”

These are like lighting a match in a hay barn.  The consequences can set your life a blaze!  Accept your mistakes, and take corrective action!

No one can take your words back or correct your actions but YOU!  Stop waiting for your mama (or papa) to swoop in and fix your crap!  Put on your grown-up pants (or skirt) and own the pain you cause.  Stop blaming the world for your mistakes.

YOU hold the DEED of Ownership on your mess!

SAY YES TO YOUR MESS!

This site uses Akismet to reduce spam. Learn how your comment data is processed.

From Skinny to Buff

Me, Myself and Disability

Because it's more complicated than that...

Diary of a Disabled Person.

Jenny in Neverland
The Life Quadriplegic

Adventures of a Powerchair user

A daily selection of the best content published on WordPress, collected for you by humans who love to read.

Breaking Free from Boundaries and Living Without Fear

What they didn't teach you in business school